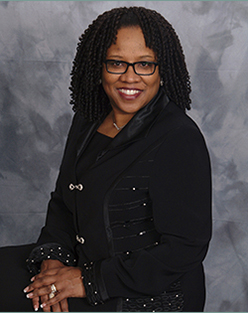 Evangelist Ryals, was born to Bro. C.J. Wilson and the late Sis. Lear J. Wilson of Tampa, Florida.  She is the youngest of ten children. At the age of five she received Christ as her Savior and was baptized into the family of God. She continued to serve in the local church in Tampa, Florida until she transition from Tampa with her husband who was serving in the United States Army.

Evangelist Ryals is married to Pastor Eddie W. Ryals, Jr., the proud mother of Dominique Ryals and her daughter-in-law, Madison. She is an outgoing leader, with a strong belief in the Gospel of Jesus. She is a Woman of God who has been given insight for oversight. She is always ready and open to be used for His glory. She counsels battered women, misguided youth, single parents, married couples and Veterans. She assists married couples in developing positive and spiritual goals for their marriage and also assists them in recognizing the importance of “marriage vows”. Evangelist Ryals has a heart for God’s people and a passion to serve people. She is motivated when growth takes place in a person’s life through God’s Word. Her message is a message of hope.

In April 2002, Evangelist Ryals yielded to God’s calling upon her life into the ministry of delivering His Spoken Word, whereby she delivered her first message to the body of Christ on December 31, 2002. Over the course of the 16 years while united with the Marlboro Heights Missionary Baptist Church, under the pastoral leadership of Dr. Shaun L. Moton, she had the awesome privilege to serve in many ministry assignments. In June 2012, Evangelist Ryals relocated to Colorado Springs, Colorado answering the call from God to carry on in ministry but in the Rocky Mountains area.

In March 2013, she reunited with the Friendship Baptist Church and served the body of Christ, also assisting her husband in his call as Pastor of Friendship Baptist Church until October 2015.  After 2 years in service at Friendship Baptist Church, The Lord would open the door for the couple to transition into the foundational desire of their call to the Colorado Springs area to begin ministry with the church planting of Greater Hope Community Church. Greater Hope Community Church held it’s first worship service on Sunday, December 5, 2015 at the Palace of Peace SDA Church. This would be the beginning of what God had placed in both Pastor and Evangelist Ryals’ heart years ago and it was finally manifested. In June 2017, God planted a new seed in their hearts to serve His people in Southern, Florida. Stay tuned to our website and watch for our first grand opening service announcement! TGBTG!!!

We have made our move to the Greater Houston area! (Cypress, Texas)

Join us every Sunday at 10:00am.
We will have 2 In-Person & 2 Virtual Services each month.
Please check our schedule on the Events page.